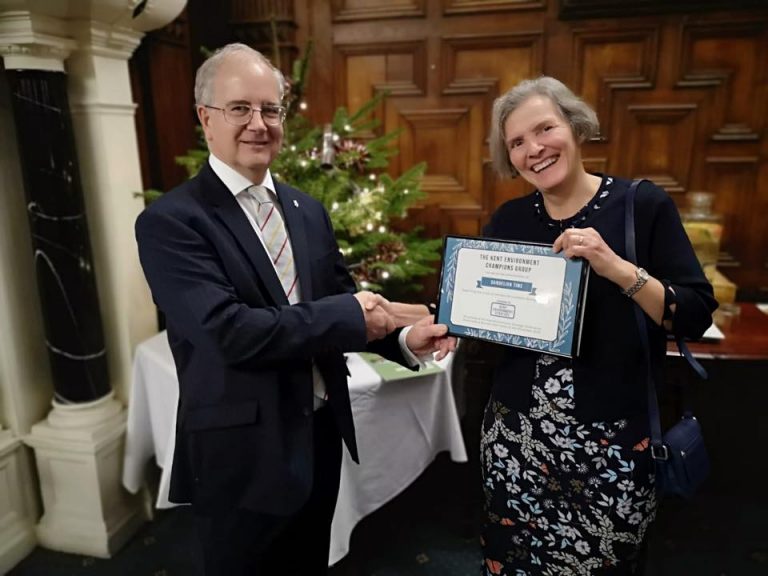 On a wet and windy night, Dandelion Time were invited to the noble baronial hall at Broome Park, once the home of Lord Kitchener, to receive an award from the Kent Environment Champions Group.

We were delighted to see the range of people in the room, from eminent county councillors, leads for public health and many people across Kent working to improve our environment and society.  Barbara Cooper, Corporate Director for Growth Environment and Transport at KCC was the master of ceremonies. Cllr Andrew Bowles from Swale and Cllr Michael Payne from Tonbridge presented the awards.

The response to the film shown of our work  was hugely enthusiastic, with Barbara Cooper declaring to the room that it would be marvellous to see the work of Dandelion Time expanded.  It was striking how many other organisations across the county have based their work on the natural environment as we have done with extremely impressive results.

At Dandelion Time we believe that nature is of vital importance to our health and well-being and can be harnessed therapeutically to the benefit of our children and families, part of a growing movement known as ecotherapy.   As a result of this experience more people will value and nurture nature in the future, to the benefit of us all. Congratulations to the hard working team at Dandelion Time for winning this award and a big thanks to Kent County Council for hosting the event and encouraging the work we do.